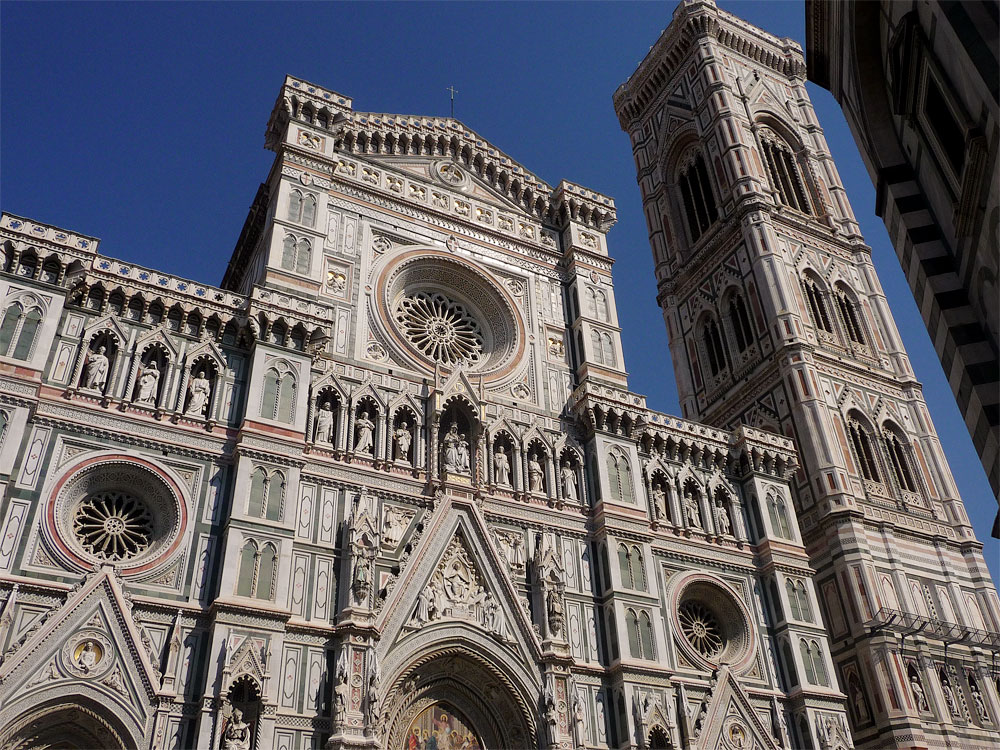 After successfully finding my hotel and 3 or 4 hours sleep, it does indeed start to get better.

Somewhat restored, almost intrepid, I grab a bus and head into town…and gradually drown in…well, Firenze, I suppose. It’s all quite wonderful, but a bit much to take in, all at once…on hardly any sleep.

I’m staggered at how familiar it all seems. Not just the art, I’d expected that since I’ve been looking at this stuff virtually my whole life. It’s more than that, and I’m at a loss to account for it. Perhaps its that, even more than Rome, this is where I come from, where we all come from in the west. I’ll happily nail my colours to the mast as a classicist. An E.M. Forster/Robert Graves Englishman (I’m even wearing the panama hat, to prove it) An anachronism in these (supposedly) enlightened days, perhaps, but I work it out like this:

The stories, images, ideas might have originated in the east, but the Greeks found the best, most persuasive and compelling ways to tell them. The Romans gradually drained most of the strangeness out of the Greek stories, Byzantium filled them with spirit, but they didn’t become truly civilised until the Renaissance – which started right here. The Grand Tour disseminated this shining light throughout the West, and it became deeply embedded in the humanist striving at the heart of The Enlightenment. No Enlightenment, no Industrial Revolution.

This really is where we come from, no wonder it all feels so familiar. Bet I still get lost, though. Time to go and look at something famous… 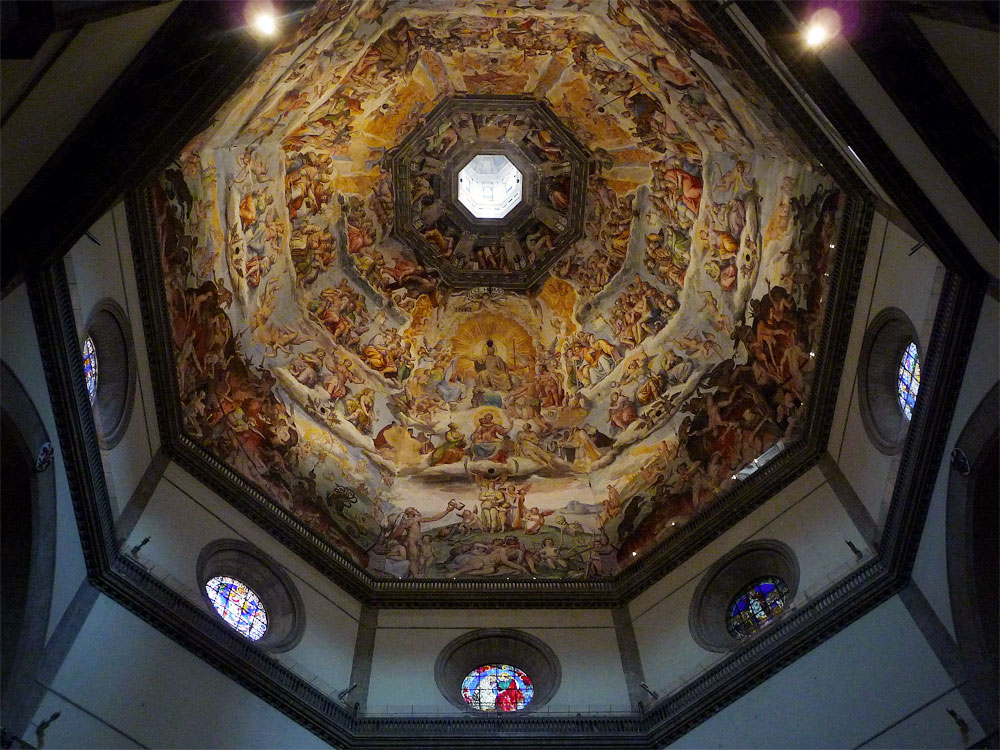 Like the Duomo (Santa Maria del Fiore). Shame it’s just known as ‘the Duomo’, Saint Mary of the Flowers sounds so sweet. Looking at it, though, I can see why. The singular, declarative, emphatic ‘Duomo’ definitely suits the sheer bulk of the thing, it’s huge. But not heavy, monumental shapes relieved by intricate, almost soft decorative detailing.

Inside it’s a barn, and looks pretty much like what it was originally intended to be : a monument to Florence’s wealth and power, to civic pride. I thought the only larger interior space in Italy (St. Peter’s, in Rome) was a barn, as well. But there I was moved, despite the vast scale of the place, had that sense of being in a charged space.

Here, despite the phenomenal engineering achievement of Brunellischi’s crowning dome, I find myself paying more attention to the people around me than the space. (Perhaps perversely, I find I prefer Giotto’s lovely campanile) I’m struck by how many people cross themselves and light a candle…and then, almost without exception, join everyone else in adopting the ‘camera in both hands, held above the head’ gesture which seems to be the preferred gesture of – if not worship – acknowledgement? Acquisition? Whatever it stands for (all these, and more), it’s something I get very used to seeing over the next few days.

I nearly skip the Duomo museum, but end up being very glad I didn’t. It’s stuffed full of fabulous stuff, including the original panels from the ‘Paradise Gates’ of the Baptistery, stunning 14/15th C paintings and altar-pieces, Florentine style. (On a gold background, of course) and a wealth of other marvels…but happily climbing to the the top floor, nothing prepared me for Donatello’s Mary Magdalene. 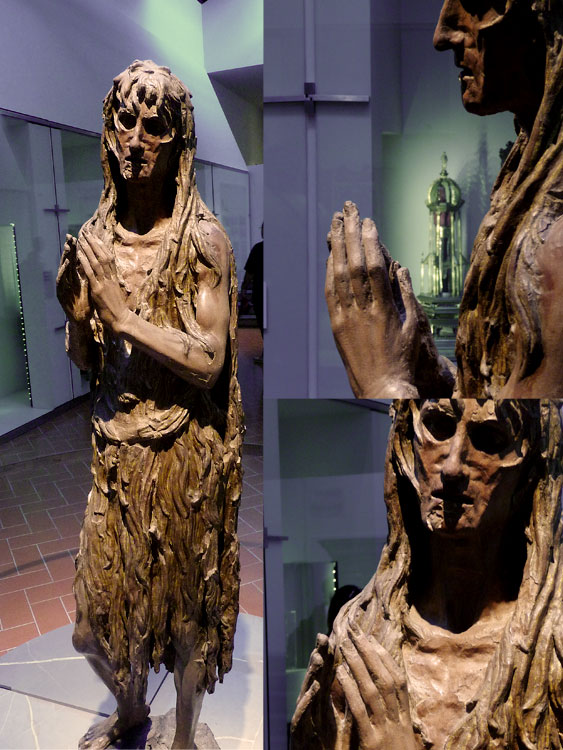 A slightly less than life size carving, it’s astonishing, stunning. One of the most powerful and affecting images of loss and suffering I’ve ever seen and it made me weep. Even now, recalling the impact, I’m misting up.

For my money, this is one of the very greatest sculptures in the world (you can keep David, of which more later), this is worth the journey. Other artists have essayed the ragged, haunted figure, but there’s nothing quite like this, it’s like being kicked in the gut. It’s so rough, un-idealised. I can’t begin to imagine what sort of an impact this must have made when it was new. Almost impossible to believe Donatello came before Michelangelo. As unlikely as Picasso pre-dating Renoir…

Eventually I stumble blearily back outside, resolving firmly that a) I’m not going to fret about not being able to get into the Uffizzi, or anywhere else that’s full, as there’s more than enough to see as it is and b) enough of this emotional maundering, what the inner man really needs is…gelati…pistachio, grazie. Strange that I’ve waited this long. No wonder I got all emotional…

I now have a huge dollop of the finest pistachio ice-cream to be had anywhere, and am happily demolishing same leaning on a wall in the corner of the Piazza delle Singoria. Eying the Palazzo Vecchio on the other side of the square. In front of this, and under the Loggia dei Lanzi, just around the corner, is indisputably the finest collection of Renaissance statuary ever assembled in one public space. Anywhere. Ever. For free, for everyone to see. (Never mind that two of them are very good copies)

In order, reading left to right, I can feast my eyes on :

A huge fountain featuring an impressive, though slightly indecorous, marble Neptune by someone who’s name I can’t recall.

Donatello’s bronze of Judith and Holofernes

then, under the protecting eaves of the Loggia

Cellini’s masterpiece, the bronze of Perseus and Medusa

Giambologna’s sinuous, surprising marble of the Rape of the Sabine

various other classical things in the back of the loggia.

It’s very hot, the piazza is stuffed with people and my hands are sticky with melted gelati…but none of this matters, when there are such wonders to behold, and I gaze and gaze and gaze. Despite it’s fame and familiarity, try as I might my gaze slides off the Michelangelo, and keeps returning to Cellini’s dark and fascinating bronze. 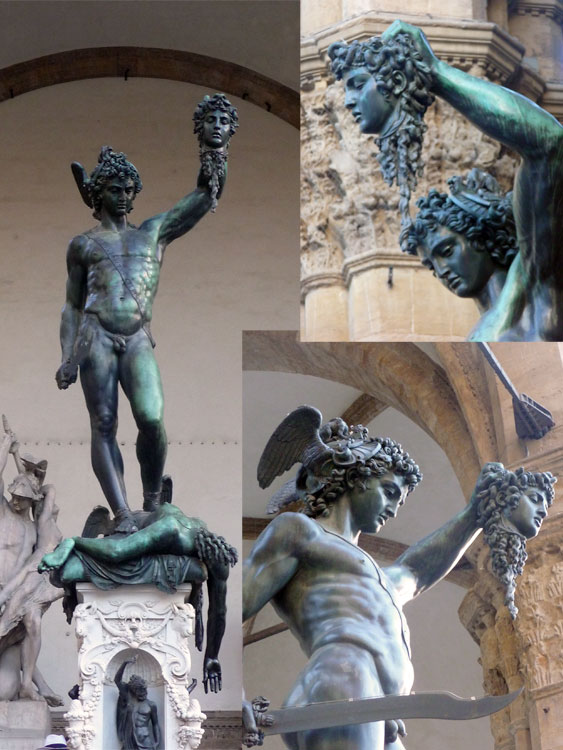 Not just because it’s a thrilling treatment of a classical ( as opposed to biblical – we all have our prejudices) subject, but because it more than repays prolonged inspection. Get beyond the obvious, mannerist heroism of the pose – Perseus standing on the corpse of Medusa, holding aloft her decapitated head – and it’s deeply, touchingly, human. Perseus has a bit of a pot-belly and he’s rather narrow shouldered, but it’s his slightly withdrawn expression that really does it. No triumphalism here, it looks more to me like the apprehension of the enormity of what he’s just done. And, perhaps, the beginnings of the knowledge that his life has just come to its peak – it’s all downhill now – and the shadow of sadness that inevitably accompanies such a realisation.

The bright, white perfection of David simply doesn’t touch me in the same way – “perhaps [it’s] very clarity and scrutability is antiseptic to the germ of magic…un-mythopoetic”, as Patrick Leigh Fermor astutely writes. Even I can see what all the fuss is about, it really does stand out as being subtly but powerfully different from anything around it. I find it almost inhuman in its perfection and, somehow, all surface. But then, I wasn’t all that taken with the Sistine Chapel (much preferring the Raphael just around the corner), so it’s clear that I just don’t get the big M.

It seems an odd thing to say, but on reflection it really has been worth the journey just for the past couple of hours alone. I really could happily go home now, if I had to (with a bucket full of gelati as a souvenir, naturally). It doesn’t get any better than this, anything else is just a bonus. Why it’s so important to come here and stand and gaze at the actual things themselves, in the place where they belong, rather than simply look at photos in books (as I have been doing for as long as I can remember) I don’t know. But it is, it makes all the difference in the world.

This has been one of the great days of my life…all right, afternoons, and I can begin to appreciate the impact such sights had on the impressionable young sprigs packed off on the grand tour. It’s the sort of the thing that stays with you for life, and, perhaps, changes how things look to you (or how you look at things, it amounts to much the same) forever.

Enough of this vapouring, time to go and see how much of this romantic nonsense survives pizza and beer.

Well, quite a lot, as it happens. Oh dear, oh dear oh dear. 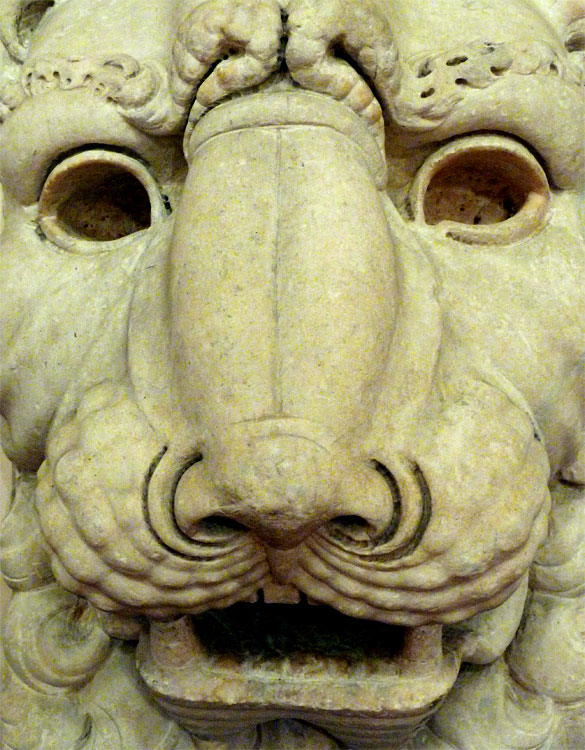 Replete, but not quite ready to call it a day, I wander about for a bit…past a succession of what look to be very old buildings, currently occupied by a series of very stylish shops, mainly clothes and shoes. It’s a striking juxtaposition, but then it occurs to me; in a place like Florence this is the only way of getting a central location with the essential passing trade. Where else are they going to put them? Heaven forbid they should demolish some of the old bits (on the spurious grounds that they’re not really suited to modern retail needs) and replace them with some awful modern contrivance…like a shopping centre.

In the course of the week I discover that there is at least one modern shopping centre close to the ancient centre of Florence. It’s underground. Tactful and amazingly sensible, if you ask me. We could learn a lot here.

In retrospect, the foolishness that ensues in the course of trying to get back to my hotel was almost inevitable – something stupid had to follow an afternoon spent thinking such elevated thoughts. Unsurprising also that the stupid thing is me, belatedly realising as the bus bumps and rattles along that not only have I forgotten the name of my hotel, but I’ve also left all the bits of paper that might contain useful information in the draw of my bedside table. 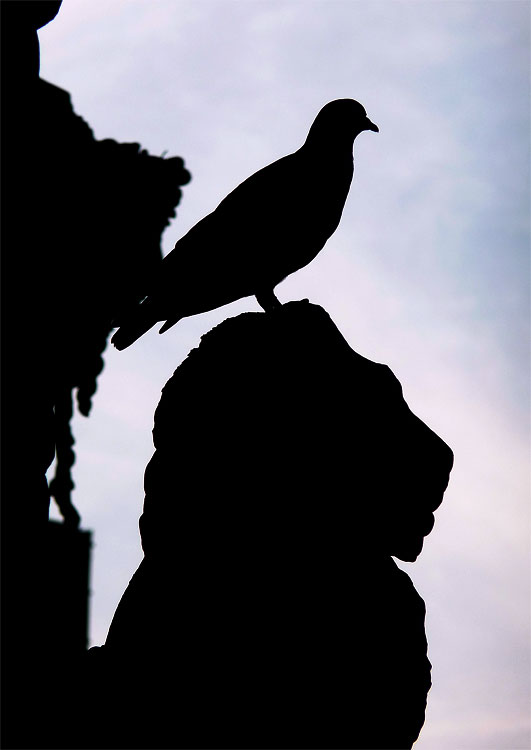 I thought it was all going too well.

I can remember which number bus to get, but have only the vaguest of notions as to where to get off…so I can’t ask anyone for help, as I don’t have enough information to go on..as a result of which I ride the whole route, then all the way back into town again. Having pummelled the brain extensively whilst waiting for the next bus, to do it all over again, I eventually alight roughly where I’ve worked out I should be.

Fortunately – more by luck than judgement, I’m sure – it turns out that I’m right, even though I haven’t even remembered the name of the hotel correctly. What an idiot! I’ve realised that both buses (coming and going) go down the same side of the road, in the same direction. Confusing, but scarcely enough to excuse my extraordinary stupidity.

Oh well, got there in the end…and now I’ve worked it out there’ll be no stopping me. I blame the bulbs on runway 2 at Manchester Airport…and the long and wearying digressions that flowed there from. That’s my excuse, with which I console myself as I drift into exhausted slumber.