It doesn’t take much to make Allan happy. A gentle breeze to take the edge of the heat, a seat at a quiet café, a cheap and delicious plate of rice salad and the best part of half a pint of caffe latte will do it pretty well every time.

Even the fact that the one thing I’ve schlepped all the way over here to see in the archaeological museum – the famous Etruscan bronze chimera (as a devotee of mythical beasts how could I resist) – is nowhere to be seen fails to dent my contentment. As an added bonus, I swear I’ve just heard a pigeon wheeze; the scruffiest pigeon I’ve ever seen, hopping  down the steps outside the Ospedale degli Innocenti. Of such minor delights is true contentment born. 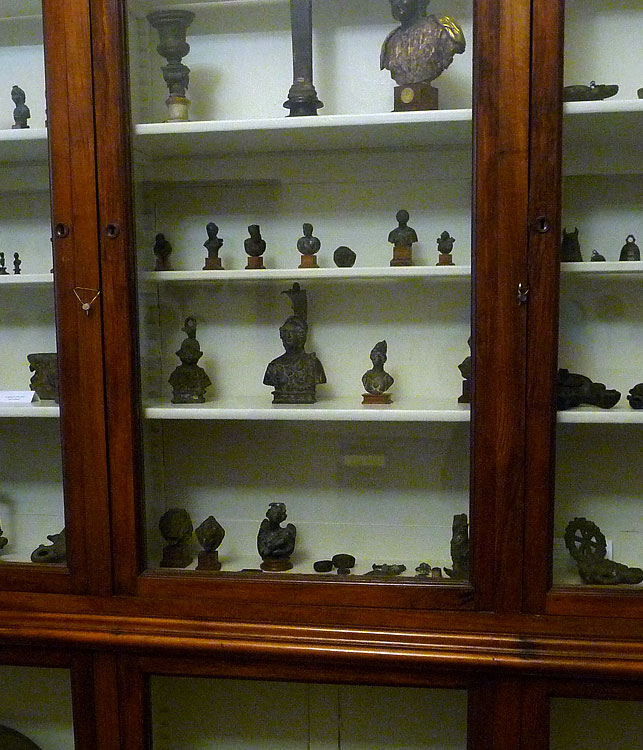 The archaeological museum is an odd place, obviously in the throes of being modernised, but there’s still rooms and rooms full of 19thC wooden display cases – I feel a little like an extra in an Agatha Christie film, for some reason – most of which prove to be full of loads and loads of lovely little Etruscan bronze figures. An attractive mezzanine and the second floor seem pretty well done, effectively showing off a good collection of Egyptian, Greek, Roman and Etruscan artefacts. It takes me a while to notice, but the basic building itself is very attractive – a massive 17thC villa. Complete with delicately painted neo-classical walls and ceilings. Sensibly, most of these have been cleaned and restored, and they complement the exhibits very well. The only exception seems to be in the Egyptian galleries, where they’ve painted the walls and ceilings to resemble the interior of Egyptian tombs ( I presume). Lovely deep blue ceilings, lotus friezes around the edges, here and there what looks like a pretty good reproduction of a hieroglyphic panel. I do notice one oddity on the ceiling of one gallery – a patch of what I presume is the original, neo-classical painting, peeping through the blue. It looks like someone ran out of blue paint before they finished the job, and I’d love to know if it’s still there. 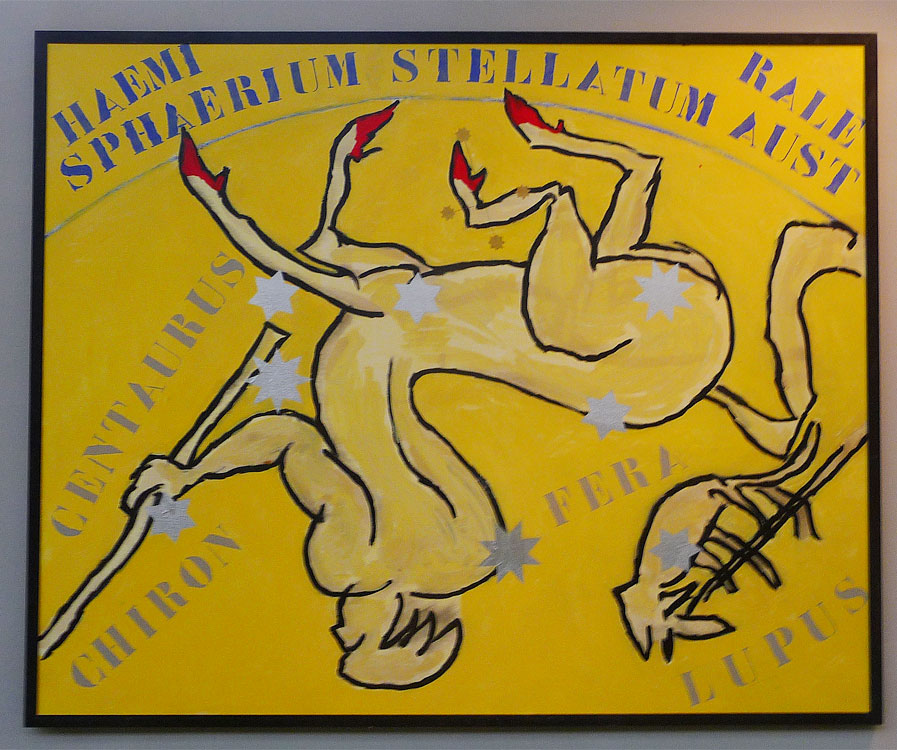 The mezzanine features an interesting exhibition (spread across 3 venues, as near as I can make out) exploring mythological ideas around the horoscope, and displaying a variety of historical artefacts alongside contemporary paintings and prints. It’s a bold idea, and I wish the modern work are up to it. Some of the prints are interesting, but the painting is just not good enough, being of that school of post-expressionism that strives for an ironic, childish simplicity, and simply ends up looking like copies of Braque or Matisse painted by an eight year old. Their one strength is the bold use of saturated colours. It’s good to see pure colour, without the muting patina of age, in any archaeological museum..it brightens the place up no end.

I had intended to do various things after lunch, only one of which (finally buying that scarf for my sister) actually come to pass, but never mind. Italian cities are the best places in the world for window shopping – almost regardless of the merchandise, the displays are so stylish.

Shame the same can’t be said for some of the potential customers. I can’t help noticing the preponderance of blokes wearing horrid ¾ length shorts covered with pockets. It’s a mystery to me why, when you can get them without pockets and in a variety of appealing shades of bright, summery colours, most choose to slouch about in shapeless sludge-coloured disasters. Studded with random pockets that make the average bloke look like he’s wearing a chest of drawers. There is no excuse, not even practicality, as I notice that most also tote rucksacks. I don’t know where this deep aversion to elegance (that amounts almost to suspicion) comes from, but it saddens me that it even seems to be catching on here… 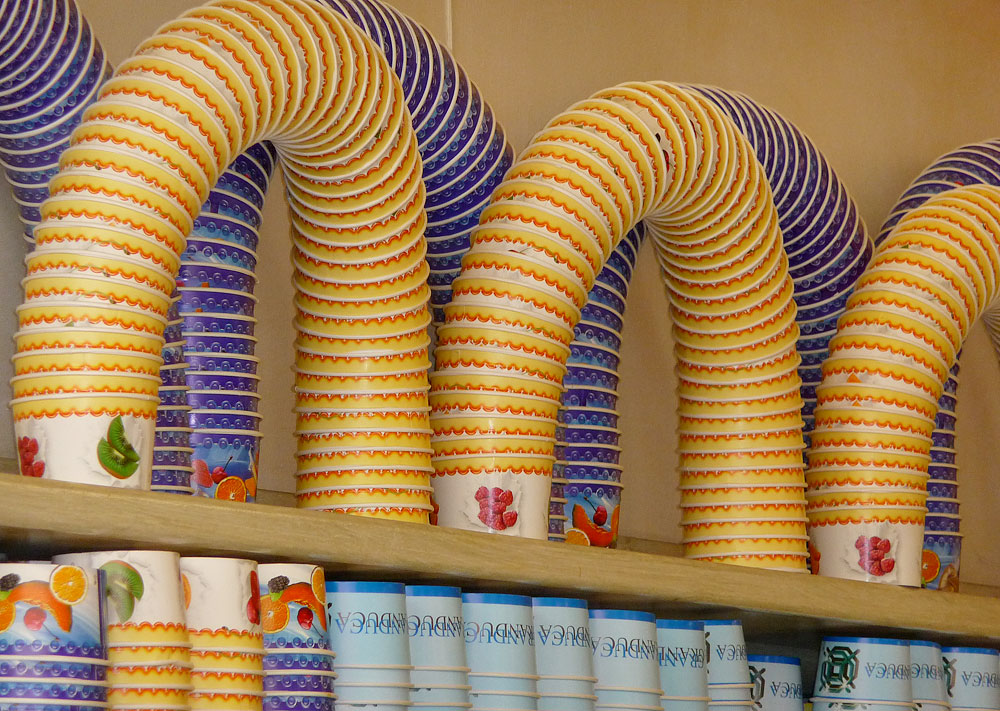 I need something cheer me up after such gloomy thoughts – after a bit of wandering around, I succeed in finding Grom. Despite the unpromising name this, the book says, is the best gelateria in all Firenze. My best efforts notwithstanding, I haven’t managed to sample them all, so I can’t say whether the book is completely accurate as regards Florentine gelateria. I merely record that Grom are purveyors of the finest ice cream I have ever tasted. Anywhere. Albiccoca to die for!

In the course of later wandering, exploring yet another, half-hidden corner. This one houses an ex-church used by the Guelph faction in the struggle between the supporters of the Papacy – the Guelphs – and the Holy Roman Emperor – the Ghibellines – who took advantage of a period of ascendancy to gut the church. Used for some time as a fire-station, it now is now a public library. All this thinking about factions puts me in mind of Romeo & Juliet, and a notion for a pops into my mind. I’ve never been to Verona (one day) so I don’t know if it’s anything like Florence, but it occurs to me that you could well create the tension & claustrophobia of “two houses, both alike in dignity” feuding with something almost like maze – slot-like passages and tiny, irregular piazzi. Imagine how much more dramatic the fight between Tybalt & Mercutio would be if, instead all the stagings I’ve ever seen involving fair amounts of space, it took place in a tiny piazzale with barely enough room to swing a cat. A back-alley affair, en vero! It would be even better on film…one day. 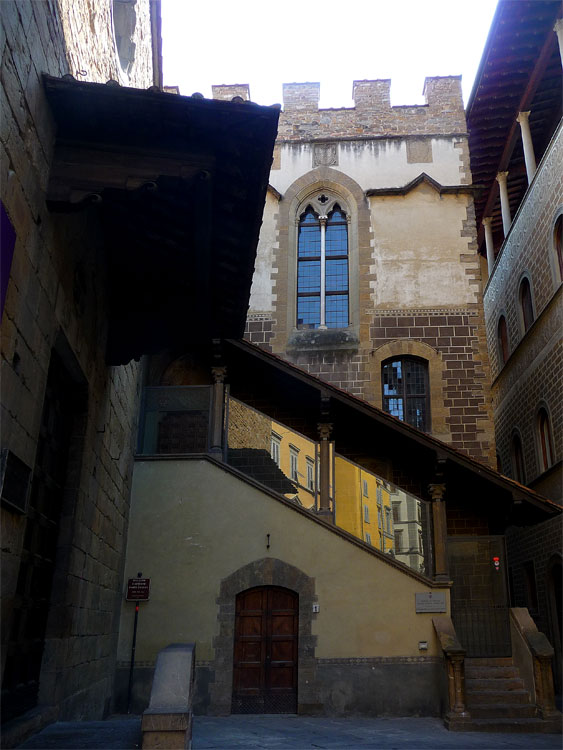 A little later than that, in Orsanmichelle, I think I’ve finally found my favourite of all the many churches I’ve visited in Florence. Architecturally, it’s a simple shape (it started life as a grain market), attractively frescoed all over the vaulted ceiling with saints..but simply. Then there’s a lovely sculpture of the Madonna and child..but the focus is an amazing Gothic tabernacle, mainly white marble containing an absolutely luminous 15thC Maestà.

The stonework is very intricate, a mixture of geometric and naturally derived plant shapes. Not the sometimes over-blown exuberance of the baroque; just as intricate, but more restrained, all the decoration serving to echo and enhance the underlying geometry of the whole, not to overwhelm or encrust it.

I think the visual balance of the whole is just about perfect. Maximum richness – gold, ultramarine & rose – at the absolute focus, the Madonna. Suitably finely enclosed in subtly gleaming marble (there’s not a lot of light about, and photos were forbidden…sorry!)then the earthy, more relaxing tones of the frescos, then simple, bare stone. It’s like a series of ripples of diminishing colour and complexity.

It’s all very lovely, and there’s a free organ recital here later, so I may well be back.

The other thing I like about Orsanmichelle is that some of it’s best art is outside. A series of niches set into the outer wall contains statuary commissioned from the best and brightest of 15thC Tuscan artists…Donatello, Ghiberti & Pisano amongst others.

It could be argued that this is simply vanity on the part of the wealthy donors – ‘look, we’re rich’ (and by implication, powerful) enough to afford this, and the public flaunting of massive donations to good causes doubtless had political significance. Even if that was the case originally, I’m willing to bet that today not more than a tiny percentage of the people who enjoy the work know who paid for it and why. And still all this fine, fine sculpture is still there, free for all to enjoy. They’re gradually replacing the originals with very, very good copies, and moving them inside to the museum, the better to preserve them. I asked about the museum. It’s closed. Che sera sera!

Writing this, trying not to doze off, in what has become my favourite café, in the Palazzo Strozzi. Chic without being too pricey, and very central for just about everywhere, trying to decide what to do with the rest of the afternoon…

I can’t really think of anything I’d like more than a little organ music, so I go back to Orsanmichelle, and just sit quietly at the back, drinking it all in – Bach again, the perfect musical accompaniment to the restrained visual richness all around. The music pours on, a liquid river of perfectly interwoven counterpoint that laps around our feet, then, stirred up by the impossible low register, froths up right over us, expanding to fill the whole space.

So there I sit, dripping with music, at peace. Deeply content.

A final, lasting memory of Florence, art and music…..until next time.