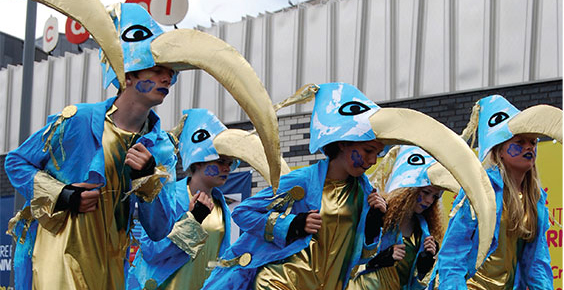 My good friends (and occasional employers) Festive Road, the Milton Keynes based Carnival company, have just finished playing host to the Carnival Network South East’s annual gala. In between cursing Powerpoint and a somewhat eccentric PA system (a role laughingly referred to as ‘Tech Support’), I was able to gather a few impressions…

The evening entertainment commencing with renowned Calypsonian Alexander D Great singing a witty and moving tribute to the the mighty Lord Kitchener to a backing track in a Novotel function room of staggering blandness and anonymity – a situation so soaked in irony as to be practicly rusty.

There was an almost impenetrable talk from a very pleasant representative of Artswork about  SE Bridge, at the end of which no-one was any the wiser. About anything, least of all what, exactly, SE Bridge is.

Tim Hill (long-time proponent of functional, outdoor music for all and any occasion) entertainingly informing everyone of the long-standing English traditions of public noise, protest and drunken revelry generally.

The legendary John Fox (founder of Welfare State International, virtual inventor of the notion of ‘community arts’ and current proprietor of Deadgoodguides.com) more quietly reminding us of the power of the rough and ready, the unfinished, the things that truly speak to audiences because they’re telling that audience’s story back to them….and how often they used to get arrested, and otherwise officially harassed.

Reflecting, on a photo from the very early days of Welfare State in the 1970s, showing the company on the road in a beat-up collection of trucks and caravans, a mobile mob of misrule and provocation…”You’d never get away with that now…”

Pax Nindi, director of the UK Centre for Carnival Arts (astonished to hear that everyone apart from him tends to refer to it as ‘ukka) was everywhere; discussing, provoking, dj-ing, snapping pix and blithely disregarding timetables.

There was much talk of what is and isn’t carnival and where it might be headed etc. It occured to me that in many places where something labelled (however loosely) as ‘carnival’ takes place, the vast majority of the audience couldn’t care less what it’s called, and who is doing the calling. Harder to say how much of a problem this is.

The whole event was full of such paradoxes and contradictions, most starkly exemplified for me by Chris and Frankie from the New Carnival Company’s passionate and funny presentation about their struggles to establish a properly structured and recognised carnival training course somewhere in the mazy thickets of our increasingly irrational and confusing Education System.

Depending on how you look at it, this is either hugely encouraging, symbolic of an overall move towards maturity and professionalism…or the saddest, most tragic thing ever – that there might even be a need for such a thing in the first place, and that anyone would try and cram the spirit of misrule into the classroom.

All of which reminded me of something I’ve been struggling to understand recently.

Any but the most biased observer would have to agree that things are pretty bad now for most of the Western hemisphere, and only likely to get worse in the foresee-able future…economic collapse, global warming, pollution…I won’t repeat the whole sorry litany.

So why are we not seeing a flood of political art, protest marches and demonstrations ? Why isn’t parliament in flames…why, to bring it back to the present context, are most carnivals little more than giant street spectacles, with about as much bite as a gummy pensioner?

When I was a student we took to the streets at the drop of hat, built effigies of politicians and burnt them..and when there was nothing to get angry about we used to try and see who could paddle a deck-chair all the way to the island in the middle of the lake in Regent’s Park – we came to the conclusion it couldn’t be done, but that didn’t stop us trying.

I refuse to believe that that energy, that spirit of rebellion and dissent, has just magically been excised from the human psyche.

If it’s to be found anywhere, surely a gathering of Carnivalistas would be the place?

No-one I talked to over the course of the two days could really explain it, although I did get a sense that other have same feeling, listening to talk of how to re-politicise carnival.

Without wishing to sound portentous, much of what lies behind all the contradictions and confusion can, I think, be characterised as opposing flows or tendencies in society.

There’s the ‘fuck it, let’s do it anyway, what’s the worst that can happen?’ (language used advisedly) spirit, traditional home of carnival – this current has no legitimacy, doesn’t care, wouldn’t recognise a method statement or risk assessment if one bit them on the bum and would be much more likely to find a more practical use for any such paper.

Not in a spirit of calculated rebellion, but from something far deeper; an intuitive, profound conviction that statutes and conventions simply don’t apply to them. All of the characteristics represented by the traditional figure of The Fool, in fact.

Opposed to that is the bureaucratising tendency that expresses it’s nature in the creation of organisational structures, stresses the need to plan and evaluate everything and draws legitimacy from claims to be acting in everyone’s best interest. A spirit that doesn’t, on the face of it, seek openly to control everything, but nevertheless always seems to end up holding the boundaries, being the bidder and forbidder.

If we’re looking for a handy archetype to peg this tendency to I’d say we’re talking about The Steward.

Not in themselves the personal representative of ultimate authority, they just speak for them, work for them….belong to them, in fact. In the old days The Steward worked for the Lord of the Manor, these days they belong to…well, take your pick…any flavour of money/power elite you care to nominate.

Note also that it’s recently become very unfashionable to talk in terms of contradictions, of oppositions, of conflicts…we should be all about partnerships, resolutions, compromises.

Well, maybe. It would be unreasonable to suggest that there aren’t many situations that would be much improved if everyone appoprached them in a spirit of open-ness and compromise.

But I still say maybe, because so much depends on context, who’s speaking, and what’s at stake.

All too often these days what I hear sounds like The Steward encouraging us all to bury our hatchets and make his life easier.

So lulled by smooth words have we become that many of us seem to have forgotten that we even have hatchets. Until we are forced to such extremes of alienation, despair and disgust that we belatedly remember where they are. Then, instead of waving them about and yelling, maybe cutting down a few gallows or graven images, we turn them on each other. Rusty and blunt through long misuse, they then inflict hideously painful, battering, wounds. We run riot, literally.

What is wrong, and deeply damaging, is any situation where the balance has swung too far one way or another, where one side no longer has the power (or feels they don’t, which amounts to the same thing) to tip things back their way.

As when, to take a random example, the gap between the richest and poorest has widened so rapidly over the past couple of generations.

Who’s banner do you carry in the parade, The Fool’s or The Steward’s ?

For entirely understandable reasons, I get the distinct impression that most carnivals these days carry The Stewards banners, even if their hearts are still with The Fool. Harried at every turn by paper – funding applications, evaluation forms, risk assessments and all the rest of the bumph it was, perhaps, inevitable.

Personally, I think the rot started to set in when artisans decided they wanted to be artists, a very long time ago, but as John Fox says in his recent manifesto – ‘A New Role for the Artist’

If Art….. is re-colonised as a process; a vernacular process which is sometimes playful and sometimes mind-bending, which is recognised as a mode of knowledge, an intuitive and lateral way of being that subverts the rational, then we are in with a chance.”

If the Carnivalistas can square this circle, then there’s hope for us all.

The spirit is still there, that’s for sure…as evidenced by the very last thing that happened at the gala.

As it happens, Festive Road are currently faced with the unenviable task of having to shift everything (and that’s a lot) from the ground to the first floor of the re-purposed office building that is their current base. They asked all the conference delegates to take one thing upstairs with them before they left, expecting just that.

Instead the Soca went on the PA and everyone pitched in with a will, and amid much banter and laughter, dragging giants, birds, masks, costumes, materials upstairs…we had ourselves an indoor carnival.

It only lasted for about three quarters of an hour, and there’s still a huge amount to shift, but I reckon it was a bloody good start.

The Wild Things might not be that lost after all.