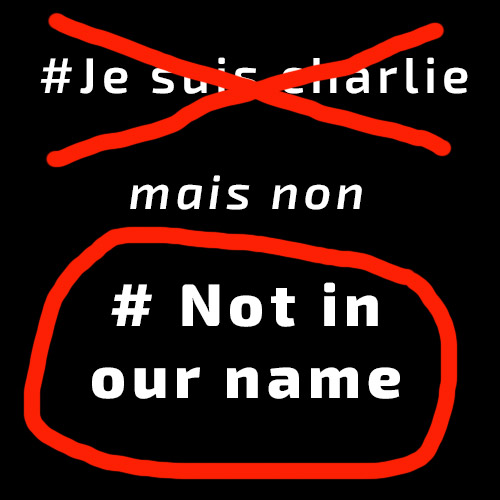 …safe to say pretty well everyone reading this will know what I’m talking about, and that the majority of you will have avowed the same via one social media channel or another.

It’s swept through us like a wild-fire, and seems to have ignited imaginations in a way which rarely happens on such a scale, or so fast.

A testament to the power of social media and the importance of the right of free speech ?

Possibly…I’ll come back to this in a minute.

A deeply human up-welling of grief, shock and sympathy?

Certainly, but we should be wary even here…Mosques have been burned, more people killed. Deeply regrettable, horrific, even, but understandable, n’est pas?

Entirely understandable of course, given the afore-mentioned – and hugely public – upwelling of grief etc.

What does it take, how many atrocities committed, before revenge becomes justified?

Just posing the question makes me feel deeply queazy, as it moves the whole thing into some very uncomfortable territory. It takes it to places where, historically, we haven’t fared at all well, at whatever level you look: tribe, nation , race or species.

I can’t be the only person hearing that horrible, insidious phrase ‘just war’ being whispered in corners, blowing in the wind, can I ?

A heart-warming affirmation of the way people can be united behind a cause ?

Definitely, but still not entirely a cause for whole-hearted celebration I think.

Of course it’s great that so many people feel the need to come together to express their sympathy and solidarity, and also good that modern media allows us to see ourselves doing it so clearly.

You could say the media (social and otherwise) have become a giant mirror we’re collectively holding up to ourselves. Looking at the flood of images and footage from across Europe (and, increasingly, the world) just at the moment shows us up pretty well, doesn’t it?

Yes, in the sense that anything that so clearly demonstrates our capacity for coming together in grief..etc etc (see above) has got to be good for us, emphasising our common humanity.

No in the sense that you have to be part of the crowd holding up the mirror to see that reflection, and at the moment, in the West, that’s very largely a one-sided, one-dimensional picture. A moments reflection should be all that’s needed to see how dangerous this is, how premature any self-congratulatory feelings of inclusion and brotherhood should be.

It all depends on your point of view – from what I’ll call for want of a better word, the western side of the mirror we see only our shared grief etc etc, how it’s bringing us together.

From the point of view of the Islamic world is not at least conceivable that this looks like something deeply threatening, a collective drawing of battle lines?

It all depends on your perspective.

Which brings me neatly back to what bothers me most about all this.

For better or worse, this has to date largely been constructed as being about the right to freedom of speech. There has been much sound and thunder about the supposed sanctity of satire, how a healthy society requires the ability to laugh at oneself, and how taking offence is somehow the response of the lesser man, the less evolved society.

Whilst it I’d be the first to encourage broad public debate of such important social/politcal/philosphical concepts, I can’t help but notice this is precisely what we haven’t (so far) been gifted with.

Even leaving aside the obviously hugely important recent historical context (i.e. the way we in the west have been happily trampling over much of the geographical heartland of Islam whilst demon-izing it’s followers by perpetuating the poisonous rhetoric of the ‘war on terror’) much of what I’ve read recently has been shockingly one-sided at best and downright hypocritical at worst.

Hypocrisy first – not, heaven forfend,  as a slogan, but because here the argument is very straightforward – being summed up in a single question.

How is the stance European governments have taken (most notably here in the UK and in France) on silencing radical Muslim clerics by prosecution, deportation and imprisonment not a substantial attack on those individuals rights of free speech?

I’m well aware of (and remain deeply opposed to) the recent legislation w.r.t. to inciting racial hatred, and consider it at best a flawed and deeply divisive innovation, a very blunt tool indeed for tackling a complex and difficult set of problems. A quick political fix to legitimise the removal of important rights from dissident voices apparently beyond the reach of other, more usual, sanctions.

The only thing that can be said in it’s favour is that it does at least address the consequences of such speech – by swinging the pendulum to the other extreme, thereby institutionalising the hypocrisy.

A properly balanced debate needs to encompass both sides of the question – rights AND responsibilities.

Almost everything I’ve read in the past few days has been based on a strikingly (terrfiyingly so, to my way of thinking) narrow definition of what constitutes a ‘right’. It’s all been about the protections or permissions conferred on the individual or organisation claiming the ‘right’, with little or no consideration of anything, or indeed anyone else.

My basic objection to this arises from consideration of the (in this case implied, but often explicitly stated) word ‘human’ immediately preceding the word ‘right’.

Surely one of the basic capacities of the human is empathy, the ability to put oneself in the other persons shoes?

If we’re trying to build an enlightened conception of ‘human rights’, this consideration for others should be central in our conceptions. Not just in the (admirable) motivation to articulate and defend such rights in the protection of others (especially those who may be unable to defend themselves, for whatever reason), but built into the very heart of the notion of ‘rights’ in the first place – ‘rights’ for the individual which implicitly recognise the existence of others, and that there may be other rights, of other individuals to be taken into account. This makes it all a lot harder, I recognise that, but shouldn’t we be at least trying to grapple with this if the alternative means abandoning a vital element of our collective humanity?

Far better, I submit, to consider a dual model – for every ‘right’ we wish to define and defend, there attach certain clearly understood responsibilities, the abrogation of which automatically invalidates the ‘right’.

Before you object, just think – this is substantively no different to the argument about tax evasion on the part of the so called ‘non-doms’. If you reside in the a country, you should pay your fair share of the costs of providing the services you enjoy as a resident, and that to seek to evade that liability is essentially unfair (even if it might be legal, within a narrow definition). Same goes for the multinationals who some how manage to avoid paying corporation taxes. It’s easy to see that this is a question of basic fairness.

So, I would contend, is the discussion around the right to free speech.

The view of this currently being propounded by I could call the ‘je suis charlie’ movement is essentially unfair, in that it refuses to acknowledge that there might also attend certain responsibilities in the exercising of the right…perhaps because to admit this might also be to admit that there are times (and that this is one) where satire is a thin veil for good old-fashioned name-calling, bullying, even. Playground stuff.

Nothing excuses the killing, but perhaps a more nuanced discussion might make it a little less likely next time.

When this all started I was happy to get swept up in it, declaring like so many others ‘# Je sui Charlie’ without even being very aware of what, and who I was subscribing to.

Now I’ve seen a lot of the cartoons I find them crass and insensitive.

To me it seems that a strong case could be made for finding them deliberately provocative and designed to incite religious/racial hatred.

The furthest I would be prepared to go now would be ‘#Je suis Voltaire’ – I may not agree with what you’re saying, but I defend your right to say it…and that reluctantly in this particular case, for the reasons outlined above.

There’s only one banner I can whole-heartedly lend my support to.

Please understand I do not in any way condone any of the terrible actions of the past few days, and I have nothing but the deepest sympathy for the families and friends of all the bereaved…

But please don’t try and spin this into yet another strand in the poisonous ‘war against terror’ narrative, please don’t use it as an excuse to burn or shoot anyone else, please don’t make it part of your nation’s emotional identity…

Most of all please don’t use it to bolster a partial, not properly thought through and potentially deeply damaging view of ‘rights’.

#not in my name

Can’t we get together and talk about this properly?