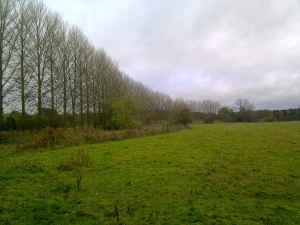 I was only going to get some cheese, as you do on a gray Sunday afternoon, when I was seized by a sudden desire for some green in my immediate field of view.

You’d think, as Towcester is an old (i.e.. Roman and possibly older) market town, this might be in short supply apart from the odd mature tree or two.  Not so, as it turns out – one of the best things about the place if you ask me. (That and the fact that pretty much everything is within walking distance but some of it is far enough away to make a shopping trip a possible occasion of mild virtue)

You could easily drive through the place without realising you are in a town with many rivers threaded through it – small rivers, admittedly, and most of them are technically the same river, The Tove, (which has more splits and channels than a satellite TV service)  but definitely more than mere streams. At one point it even  has it’s own flood-gate, weirs and everything, just up the high street from the weirdly huge Police Station/Court building.

Not only that, but cunningly concealed behind the Post Office and several pubs is a huge great mound, believed to have been the site of a small Norman fortification of some sort and later a medieval moot mound. Sadly, recently enclosed by a thoughtful council with a spiral path, fencing and other amenities of astonishing mediocrity, completely destroying the atmosphere of the place, it’s still a pretty impressive lump of earth for a small place.

Best of all, though, is about 60 acres or so of water-meadows, just over the river (one of the many branches of the Tove, surely the  most schizophrenic river in Northamptonshire) behind the mound.

It’s a great place to go for a walk when you want a bit of countryside within handy …well, walking distance, whether you’re suitably shod or not…

Whilst I, un-suitably shod and originally abroad
only in search of cheese
stumble like a drunk heron in futile,
stilt-legged search of the dryer course.

Pausing beside the river, still heron
like to stand in thrall to the messy, umber flood
thundering sullenly over the half-step
little weir, less than a foot fall but
sufficient today, for a wonder, for an elemental
chuntering loud enough to drown out the
usual, tedious thrum of traffic
flocking to the Sunday shop.

This place  looks like what it is;
A small corner torn off the big estate that
used to own us all now
municipally pastured for the good
for walking dogs, cycling and general idling

A soggy acreage between two streams
with some small claims to history
no profit to be had here, far
too wet to build on today
and hopefully tomorrow

Not especially scenic, bound by a file
of poplars (bare now but for the punkish last
leaves clinging to the tops), some ancient oaks
and sundry other natives.

Managed with the beasts appropriate
thereto (of the field, of course) an untidy,
shit-spattered expanse seemingly of nothing
much, bisected by three mown paths, civic-minded
and neat, for the most part ignored…at least by
the suitably shod.

Never busy, as such, not even on a good, a dry day
which this is far from being
But I seldom have it all to myself for
more than a few minutes

There’s always someone, on their
way home from the shops or trailing
behind an over-excited dog, or child
or someone

Just out for a breath of fresh air

Later, buffeted by another, sadder stream
at Aldi, aswirl amongst fretful infants, piles of
todays offer and parents whose patience is
visibly being eroded
by the sheer, grinding necessity
of it all

Damp-footed, I feel
myself unsuitably clad from
tip to toe, still rapt with
clinging shreds of wonder, or peace
or some other, equally necessary,
un-speakable thing, brought with me
from out there

I did get the cheese, and some potatoes, and on the way out of the supermarket I spotted a large pile of what at first I took to be some kind of hideous packaged logs for the terminally idle.  Closer inspection proved that ‘UKHeatLogs’ are, in fact, made of compressed sawdust. A good, ecologically sound, thing – if the blurb on the packaging is to be believed.

I made my home in a thoughtful frame of mind, wrestling with the proximity of sawdust logs to water-meadows, and nursing a faint hope.

My slip-on shoes (current favourite footgear), now wet and muddy as a result of my un-anticipated cross-country detour, have been getting a bit loose of late.

With any luck they’ll shrink a bit as they dry out.