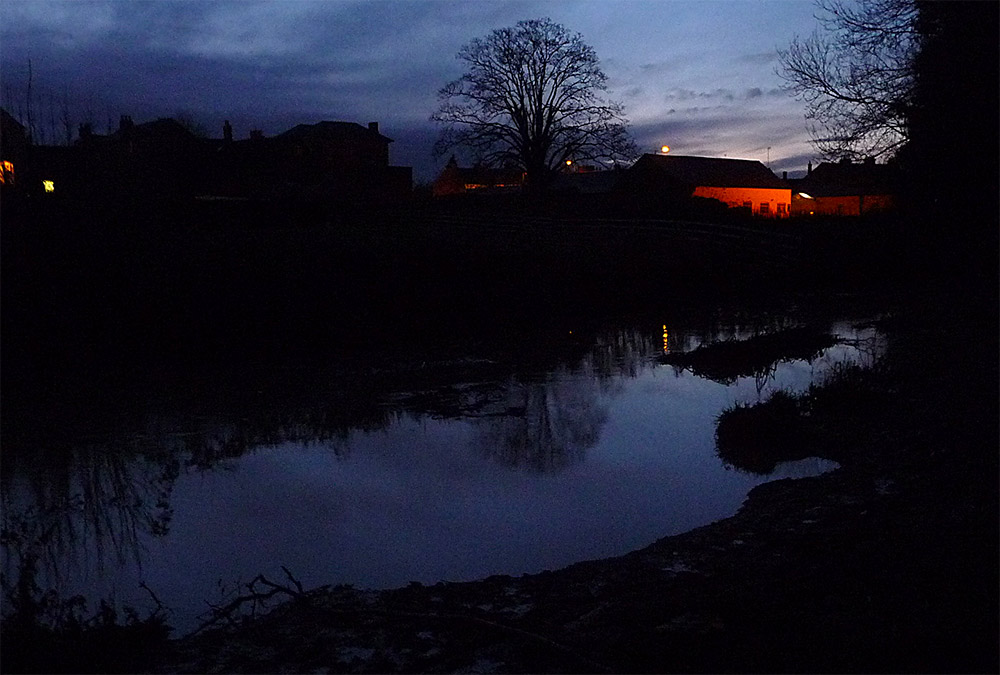 It’s been raining steadily for days – so heavily that our well known pre-occupation with the weather has once again been elevated to the status of news, and no bulletin has been complete without flood-warnings.

So it came as a pleasant surprise to see blue sky through the skylight this morning. (The skylight being more or less above my bed) A good way to awaken, and if I didn’t exactly bound of bed with a glad cry – it being Sunday, after all – I did make myself a quiet promise to go for a walk later on. Towards dusk, say.

Surprisingly, not only did the skies remain clear, but I managed to keep my promise. I even remembered to change into my walking boots. Just as well, as once past the mound and over the little footbridge it became abundantly clear why they’re called ‘water-meadows’.

The boots are reliably waterproof, but really I’d have been better with wellies, or even waders.

The river behind me was inches away from freedom, swollen and brown as an old bruise.

The meadows (which I’d previously viewed as a flat expanse of nothing much) patterned with everything from large puddles, through new-born brooks to nascent lakes. Water everywhere, revealing a hitherto un-guessed at topography, a surprising new face.

As I squelched happily along a cloud of Rooks clattered and coughed off to roost – one of my very favourite natural sounds – and a small flock of Starlings wheeled and twisted away. Several ducks ranted and chuckled at each other.

I even startled a hen pheasant (not hard – practically anything animate will startle a pheasant). It racketed off into the gloom, and I wondered again how such a stupid bird can make a noise like a psychopath with a blunt axe hacking at a tin bath. (In passing, it’s always struck me as deeply unsporting to shoot them. In a just world they would be pursued on foot, with baseball bats)

The moon rose, fat and halo’d, to cast entrancing reflections in the waters. Most of which, rather than simply lying in static pools, was in motion. Rushing and running over the humps and furrows, making impromptu little weirs and strange, snaking currents.

On the main branch of the river, over the other side of the meadows, the big weir was thundering loud enough to be heard over the distant traffic drone. 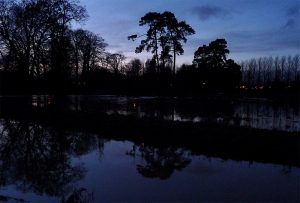 I found it all strangely stirring – something in the contrast between the distant streetlights and this shadowy expanse of moving water caught hold of me.

I’ve often thought that in one sense time travel is easy – all you have to do is leave the motorways and major roads and thread your way along the minor roads, tracks and bridleways. The farther from the oceanic swell of traffic noise you can get the further back in time you go. The past is not another country, exactly, it’s just been shuffled sideways, further and further off the beaten track.

It had never occurred to me that something as simple as several days of rain could have a similarly transformative effect on a familiar landscape, dragging it back at least far enough for an old name to suddenly seem current.

Walking back home along the road, from pool to pool of orange street light, I was reminded of an idea I had ages ago for a fantasy novel. 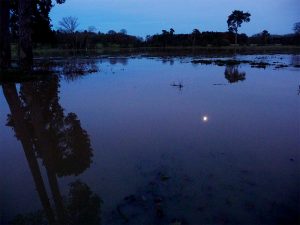 Living in Scotland at the time, I imagined that the urban sprawl had expanded to connect Edinburgh and Glasgow into one giant wall of building, within the teeming warren of which dwelt a high-tech, urban society.

Beyond the wall, by contrast, was low-tech, low density, low impact…mysterious folks amongst whom who knew what strangenesses, maybe even magic, were to be found.

In my story one of the people from the wall had to journey deep into the other, wilder country in search of…well, I never really worked that out properly, only to find on his return that he now didn’t fit in anywhere. 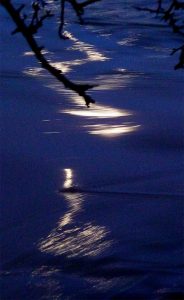 I had conceived a story in terms of simple, binary oppositions. This/that, wall/wild, them/us…and, of course, future/past.

I still think it’s a good setting, but I doubt I’ll ever get round to writing the book – apart from anything else, in many ways except the actual, for most of us most of the time I think that’s the world we already inhabit.

What’s important, I now think, is being able to travel; to move to and fro across the divide – whatever it might be, wherever you find it.

In aid of which, can I recommend geographical time-travelling to you?

It’s easy; everyone can do it, regardless of where they live.

If you can’t find a little, rutted track over the hill and into the forest, a quiet road on any estate will do. Just walk along it at night, and slow down in the darkness between one street-light and the next.

The slower you are, the further you’ll go.