Perhaps it says something about me, and the people I know, but I’ve been hearing the same thing a lot recently. People talking about ‘a weird energy’ or ‘strange vibe’. Trying to put something into words, a feeling of dislocation, something not quite right.

Strangely, it doesn’t seem to be directly related to the financial calamities raining down around our bemused heads – unless the scale of the disaster is such that we can’t quite grasp it, and are all taking refuge in a somehow softer sense of generalised un-ease. Pulling a blanket of vaguely new-age concepts over our heads, hiding until the nasty pointed sums go away….

Maybe, but that unease still stubbornly refuses to be argued away. The sense that, as an American would say, ‘the other shoe’s going to drop’ sooner or later…

It’s been sneaking up on me in the oddest of ways.

I was up in town a while back (couple of weeks ago, at most) it was a reasonably sunny day…I was struck by the vivid colours around, took these photos. Then realised what I was looking at.

They’re dying, and it’s spreading. There doesn’t seem to be much we can do about it in the short term.

The leaves shouldn’t have been this brown, this early. 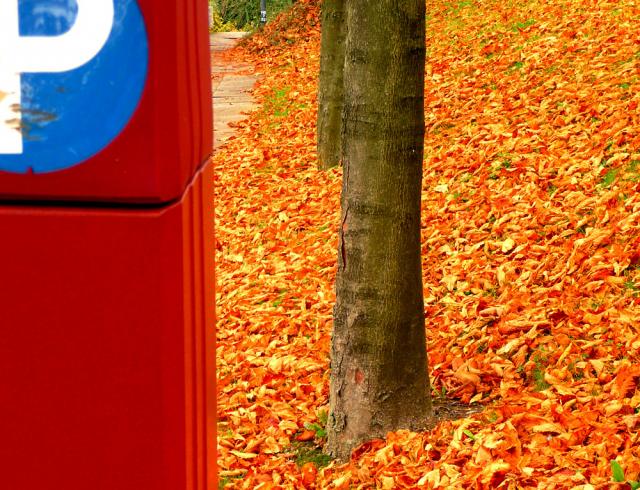 Now if you’d have asked me when Horse Chestnuts generally start to turn I have to admit that I’d be struggling to come up with anything other than a vague answer. I’d have sworn I didn’t really know. Even reading up about it, I still don’t know.

Something snagged my attention, some nagging sense of unease, of wrongness.

It took a while to penetrate, I was distracted by beauty.

Which leaves me with very mixed feelings. On the one hand, I’m somewhat comforted that I’m not so completely disconnected from the world around me that I’ve lost the ability to notice when something’s wrong.

On the other hand, I’m still waiting (along with the everyone else, I suspect) for the other (red) shoe to fall…

A shortage of conkers is going to be the least of it.