I’ve just had to add another category to this blog – ‘Art’- in order to have somewhere to lodge this.  ‘Random observation’ somehow doesn’t carry enough gravitas. I couldn’t quite bring myself to change ‘observation’ to a sort of meta-category and add ‘cultural’, ‘social’ or (worst of all) ‘philosophical’ alongside ‘random’.

I mention this partly in a spirit of friendly warning (anyone easily upset by amateur attempts at serious cultural theorizing should leave now), and partly as a way of sidling up to the matter at hand. Which is, now that I come to try,curiously difficult to pin down.

There is, however, a rat-like corner of my mind that, refusing to accept what it’s been told (or anything remotely redolent of received opinion) stubbornly gnaws away on things.  The only thing more likely to banish any prospect of a peaceful night than the sound of someone chewing in your ear, I find, is someone chewing in your head.

Here’s a few mouthfulls, hopefully enough to give  some sense of the flavour of it… 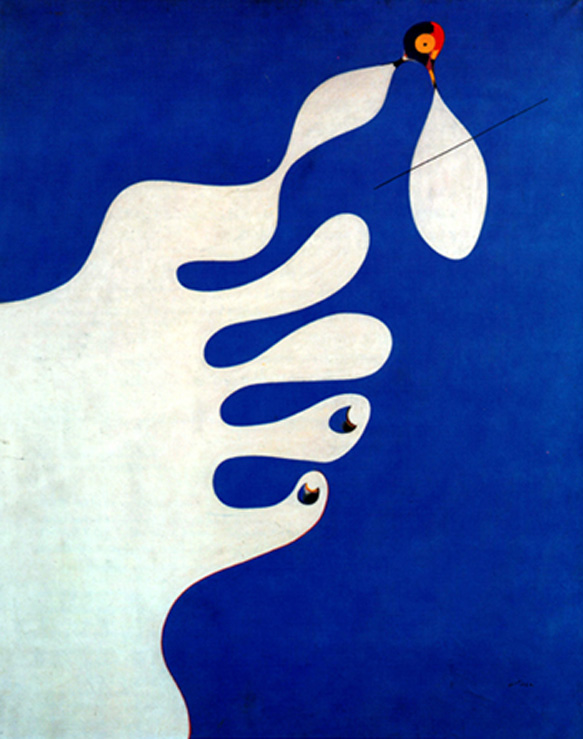 Couple of week-ends ago, in search of inspiring entertainment, went to London with some friends to visit an exhibition or two, then take in a movie to round things off. The original (wildly over-ambitious) plan involving both Frieze and Zoo Art Fairs, another show about mythical creatures and “I’ve loved you so long” as the cinematic dessert. What actually happened was, in retrospect, both sadder and more interesting.

Arriving at the Royal Academy, in search of the Zoo Art Fair (billed as a younger, less commercial, Freize) we couldn’t help but notice the banners advertising their main show – ‘Miro, Calder, Giacometti, Braque : Aime Maeght and his artists’

I’d been a little dubious about Zoo anyway (I’ve long distrusted ‘cutting-edge’ as a description of anything other than kitchen equipment). One glimpse of the Zoo staff, clad in combat gear (a drably callow imposture that somehow managed to be both offensive and depressing), and the temptation to sample known delights became overwhelming. We split up and I (along with a fellow rebel) enjoyed a blissful afternoon in the company of some of the true greats of 20thC Art. 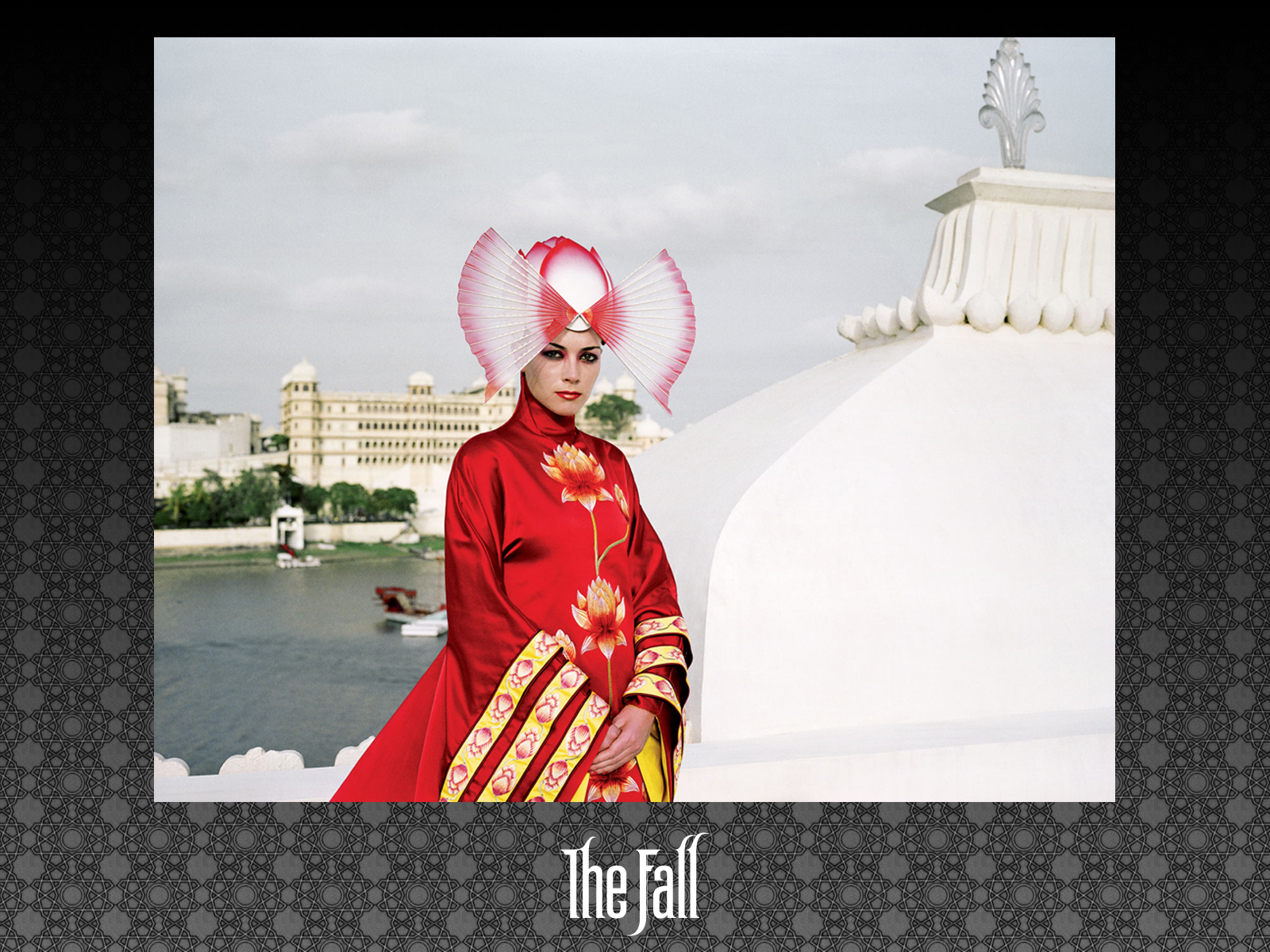 We ending up seeing a different film, as well (It was just that kind of a day).  The Fall, by Tarsem.  Once again, I found myself at odds with the general opinion of the party. It’s not that it’s a bad film, as such. It’s one of the most visually beautiful films I’ve ever seen, in fact.  Well acted. But deeply, deeply unsatisfying for all that, because that’s all it is – a lot of exceptionally pretty pictures.  I can tolerate a certain lack of substance in a blockbuster, in return for a beautiful piece of packaging. One admires the sheer craft – I love a good superhero movie as much as the next guy – and accepts it as the artfully packaged junk-food that it is. Ultimately I found The Fall despressing, because it promises much more – this is clearly a work of considerable ambition, 8 years in the making – and delivers far less. Stunning cinematography (and it is breath-taking) simply isn’t enough to compensate for a complete lack of understanding of how stories work, the complexities of the relationship between the actual and the imaginary.

More recently, I went (alone, this time) to see the Coen Brothers’ latest, Burn after reading. I enjoyed it a lot, it made me laugh out loud repeatedly.  Like most of their films, it’s very well written, shot and edited, well played. Even by Brad Pitt, which I’ll admit was a pleasant surprise. You’ll get more from it if you are enough of a film buff to recognise the tropes they’re so skillfully re-cycling. There is a way of doing this that flatters an audience into feeling good about themselves, and these guys are very good at it. (Unlike Tarantino, who can’t resist showing off)

This is not, however, a ‘feel-good’ movie. It’s not really a ‘feel’ anything movie. All the characters are (to a greater or lesser extent) unsympathetic. All of the relationships between the characters are deeply flawed. The plot is resolved, but only on the proximate ‘shit happens’ level. We are offered no ultimate insight. A good deal of enjoyment, but, again, no real satisfaction. 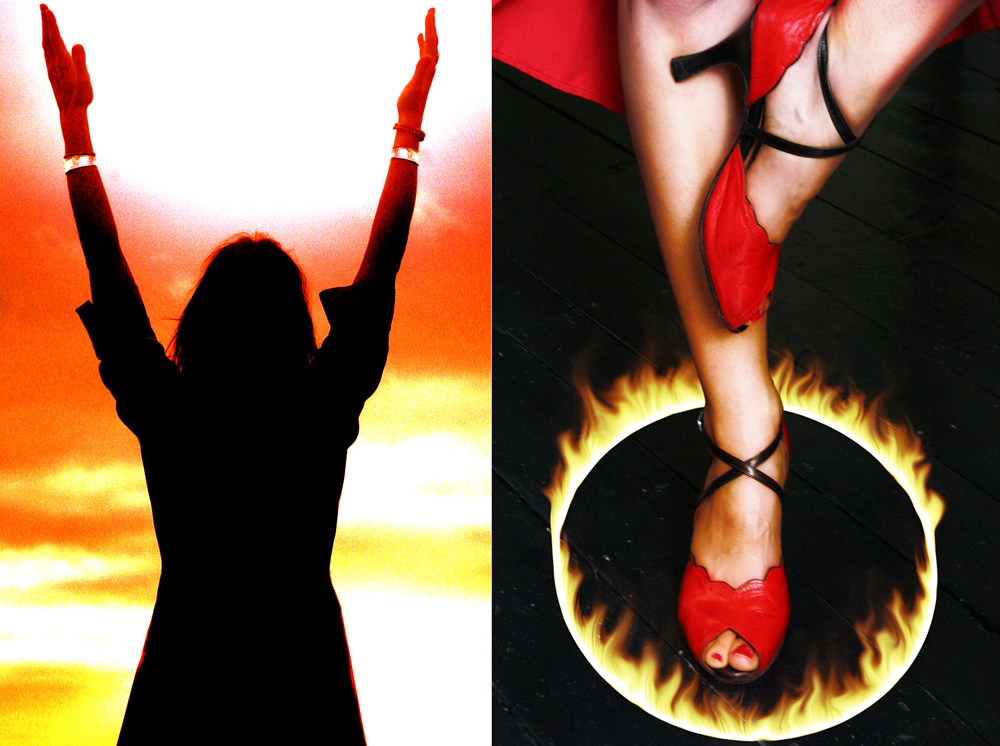 The same week I went to the Barbican to see Isis is you sis/Hecate Tango by storyteller Xanthe Gresham . For me, this really worked, and I was more than satisfied. I was enthralled, enthused, moved and inspired. Xanthe somehow manages to intertwine ancient mythological material with fragments of her own chaotic life. Impressively, she does this in a way that makes a strange kind of sense. Even more impressively, somehow each strand reflects and illuminates the other.

I could be accused of bias here – I’m a storyteller, and thus may be supposed to be pre-disposed to like anything that treats well of traditional narratives. Besides, Xanthe’s a dear friend. Even discounting all those partialities (as far as I can) though, there’s still something in all of this that nags at me.

The question is not so much why Xanthe’s show worked, (there’s no mystery about enjoying Miro et al) but why the others left me feeling (to a greater or lesser extent) short-changed?

My inner mental rat has another annoying habit. He is prone to stashing things away in corners – fragments of conversation, snatched images, a sound or a smell – for no apparent reason, only to drag them out later and see what strange patterns can be made with them.

Thinking about all of the above, looking for something to explain the slightly stale taste in my mouth, I keep replaying a fragment of conversation from months ago…

Can’t remember how it came up, but halfway through an Indian meal the talk turned to emotional honesty – my companion being of the opinion that it’s always preferrable to be up-front about things. She couldn’t stand people who keep it ‘all locked away’.  Responses varied. The other bloke strongly agreed. I don’t remember that his companion expressed a strong view either way. Wise of her. Distracted by a potent mixture of alcohol, lust and not very good indian food, I seem to remember muttering a weak assent.

Which was wrong of me. What I should have said was “Yes and no…but probably mainly no, especially not if it involves the phrase ‘self-esteem’ at any point.”

If it seems like I’m prevaricating, it’s only because I genuinely believe the answer is not straight-forward (which makes it an interesting question).  You can argue it many ways.

For example, there seems to be no actual evidence to support the oft-repeated contention that if you have a good level of self-esteem you will, in general, have a better, or even a happier life. On the contrary, the studies that I’ve come across seem to indicate that it makes very little difference, all other things being equal.

On the other hand, it’s hard to argue with the idea that we could all use a little more ’emotional intelligence’ (good notion – hideous phrase). But not, I venture to suggest, at the expense of the other kind.

Anti-evolutionists have been known to argue that ‘divine design’ should not only be taught in schools, but should be accorded equal status with Darwin’s great idea. A contention based mainly on the sheer power of their belief in what seems to them to be revealed truth.  The rationalist in me finds this absurd. Even more worrying is Richard Dawkin’s recent very public anti-religion diatribe.

And so on…I ran out of hands allready. And heart, sometimes. Tolerance, too, sometimes…to my shame. Patience often.

And that’s it. That feeling, that stale taste in the mouth…it’s getting harder and harder to shrug it off. Not to mind that the tide of mumbo-jumbo laps daily higher and higher, that no-one seems to want to think anymore.

Ok, it’s late, and I’m more than a little dispirited at the direction this seems to be taking, but I can’t help feeling that we’re only now really beginning to properly see the long-term effects of a strand of psychological/cultural/social theory that started in the late 19thC with Freud, wound its miserable way through the existentialists, Sartre and on through Derrida and Barthes.

All thinkers who have been concerned with trying to identify and dismantle (because, so often, the gap between ‘explaining’ and ‘explaining away’ is no more than a breath, a momentary lapse of moral attention) the various rickety, improbable, glorious, disturbing and down-right bizarre straw castles of fiction and imposture that we can’t seem to help ourselves building. That we all of us inhabit, all the time, whether we will or no.

Thieving bastards, all of them – in their various ways they all took something away from our collective sense of rightness in ourselves. Dismantled something, showed us the bits and left nothing to replace that which has been lost. Once you’ve seen how the trick is done the magic begins to loose its lustre.

Except, for most of us, we never really got/get a good look at what we’re (supposedly) being shown, and the explanation is in the wrong language, or too short, or simply missing altogether. No-one wants to feel left out, though, so we grab at whatever 2nd, third, tenth, millionth-hand fragments we can get…without, often, even being aware of what it is we’re trying to grasp, what baggages we have unwittingly encumbered ourselves with.

So they’re hard to spot when they re-surface again. In films, in performance, in art….or even in late-night conversations in mediocre restaurants. All those partially digested, half-grasped ideas…

We’d like to trust our feelings, but are secretly somewhat afraid/ashamed of them, we don’t quite know how to re-concile them with our intellect, and have a stubborn suspicion that we might still be made a fool of…we distrust artfice as soon as we identify it as such…

It’s this difficulty with artifice (for want of a better word) that sums it up for me. The appreciation of conventions, constructions, allegories and impostures, the wonderful sleight-of-imagination which makes it not only perfectly possible, but deeply natural and enjoyable to construct a tissue of lies which drapes over a shape very like the truth.

The last sentance alone should go a long way towards explaining why a distressing large proportion of what passes for fine art these days is such poisonous, self-indulgent rubbish.

One of the significant things that Miro, Braque and Calder share is a deep playfullness which takes great delight in fictions and impostures of all kinds.  Giacommetti was influenced by Sartre, but somehow managed to retain his essential humanity.

The Coen Brothers are very good at artifice – they delight in playing about with forms, re-cycling old tropes. That delight is one of the most enjoyable things in their work, but it often gets in the way of the other half of the equation. The emotional depth that makes the artifice both truly meaningfull and fully satisfying.

Tarsem is so mesmerised by the glittery surfaces of his imaginings that he doesn’t seem to be aware of their emptiness.

Xanthe’s work, despite it’s high autobiographical content, is a thing of intricate and beautiful artifice. Honed over a long period of time, and performed with such skill that it looks completely fresh. Utterly individual, yet very accessible. The most truthfull, satisfying and complete thing I’ve seen for a very long time.

And you know what…one of the pivotal autobiographical moments of the piece never happened (Wild horses wouldn’t drag any more out of me). I wish I didn’t know, because it’s a distraction, an irrelevancy. It doesn’t matter.

What matters is the pattern, and the intention with which it is made.

The generosity of spirit which weaves this oh so necessary, so beautiful artifice and invites us to share it.