Went for a walk in the woods a couple of Sundays ago. Partly as an antidote to an unsuccessful shoe-buying expedition (great sale…the shop doesn’t open on Sundays, as I now know) and to wash the cloying taste of commercial-mass out of my mind, but  mostly ‘cos it nearly always makes me feel better. It was a lovely sunny, sparkly afternoon as well, which always helps.

The semi-congealed mud of the path was crunchy with frost, than which there is no better surface over which to walk…each step a delicious combination of crackling coating and semi-liquid, yielding, chocolatey mud. Fabulous foot-food, deeply satisfying to walk through and never mind that I should probably have swapped shoes for boots. 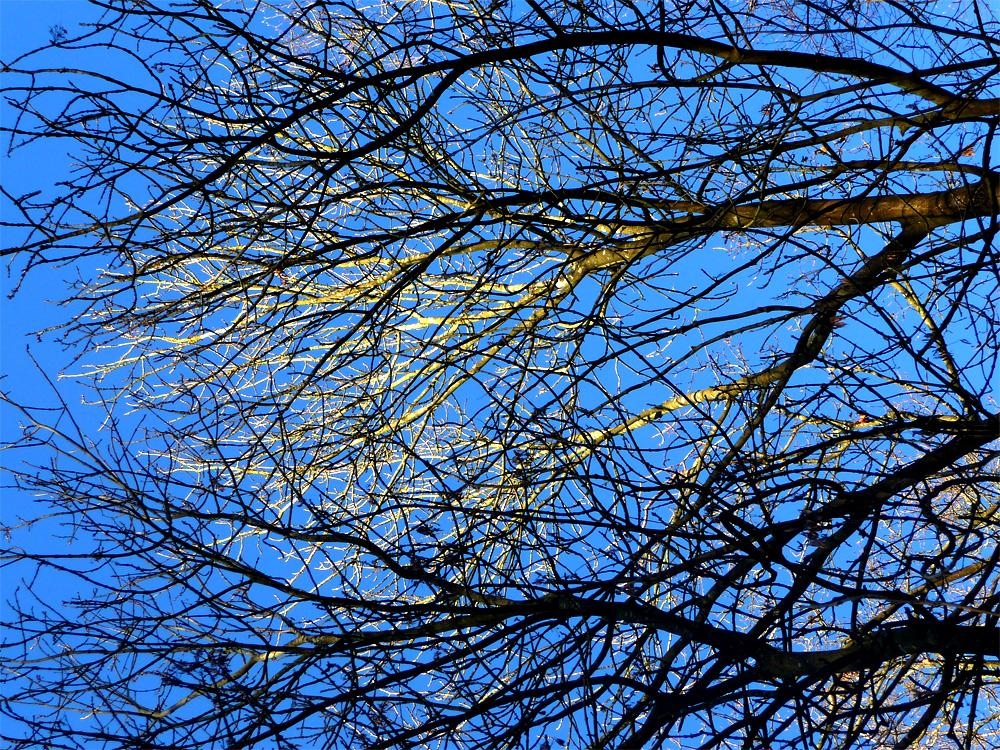 As always, it takes a while for the inner chorus to subside – the lists, arguments, rehashings of past conversations, fragments of tunes, random anxieties – all the mental voices one tends not to notice so much in a generally noisy world. Eventually, blessedly, the babble quietens. As it does so, my vision gradually clears, until I’m actually able to see what’s in front of me. This is not as daft as it sounds – most of the time our brains automatically do a sort of colour-by-numbers job of presenting a visual picture of the world to us. We get the broad outlines, edges and contrasting and/or moving things, but the rest is pretty sketchy. Interestingly, though, all the extra visual information our automatic circuits usually don’t present to our conciousness is still gathered. The eye sees what it sees, it’s just that we aren’t always consciously aware of the details.

This merciful process – inner voices stilling, vision clearing – is one of the main reasons why I find expeditions like this so necessary from time to time. It’s not just the mental quiet, although that’s benison enough, or feeding that bit of me which simply glories in the beauty around us. It also allays an underlying anxiety that one day I’ll forget how to look. Unless you’re very lucky, it’s something you have to learn. Just like any other acquired skill, it’s apt to grow rusty if not regularly excercised.

I’m making a big thing of this – to me it’s important – but it’s really not that much of an effort, and the reward is more than worth it…apart from anything else, I find that I almost always see something I’ve never seen before.

Having a camera in my pocket (a relatively recent thing) just makes it easier – both to look, and then to share anything that seems worth sharing.

This time, once I’d got the ‘little boy stamping in chocolate puddles’ out of my system, 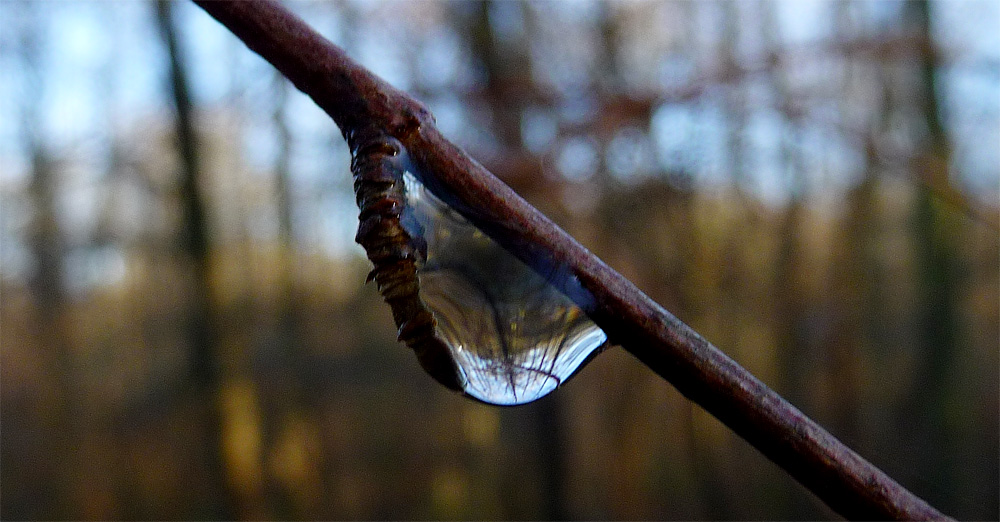 I was entranced to suddenly notice a droplet of water hanging on a thin twig, glistening. So busy was I with a)looking and enjoying, then b) trying to get a decent photo (I leave it you to decide how successful I was) that it didn’t occur to me that this might not be an isolated phenomena. Until I turned to look back up the path, into the sun, and was dazzled by hundreds of glints. Practically every twig for yards was garnished with at least one drop…a glistening galaxy, casually draped over some apparently ordinary birch and hawthorn scrub. It’s not hard to work out where they came from – melt water from a heavy frost, but that’s not the point. It was breathakingly lovely, and I’d never seen it before. I might have walked past something similar a dozen times before, but I’d never seen.

That alone would have made the trip (and the subsequent removal of Northamptonshire from my shoes) worth while, but when I did eventually turn back, defeated by the increasing gloopyness of the path and the rapidly fading light, I was lucky enough to spot something else.

Something odd going on with the usual tangle of small branches and twigs that tends to fill in the gaps between trunks in broadleaf forest. For some reason, I found myself suddenly thinking about giant spiders…Looking closer, I noticed a very strange effect – presumably caused by the very low angle of the sun – the whole messy net of undergrowth was starting to look unmistakeably web-like. There seemed to be a pronounced upwards curve to all the (generally) horizontal elements of the undergrowth. Like looking down a deep, twiggy tunnel. Either that, or there were some arachnids of unimaginable size lurking around somewhere. 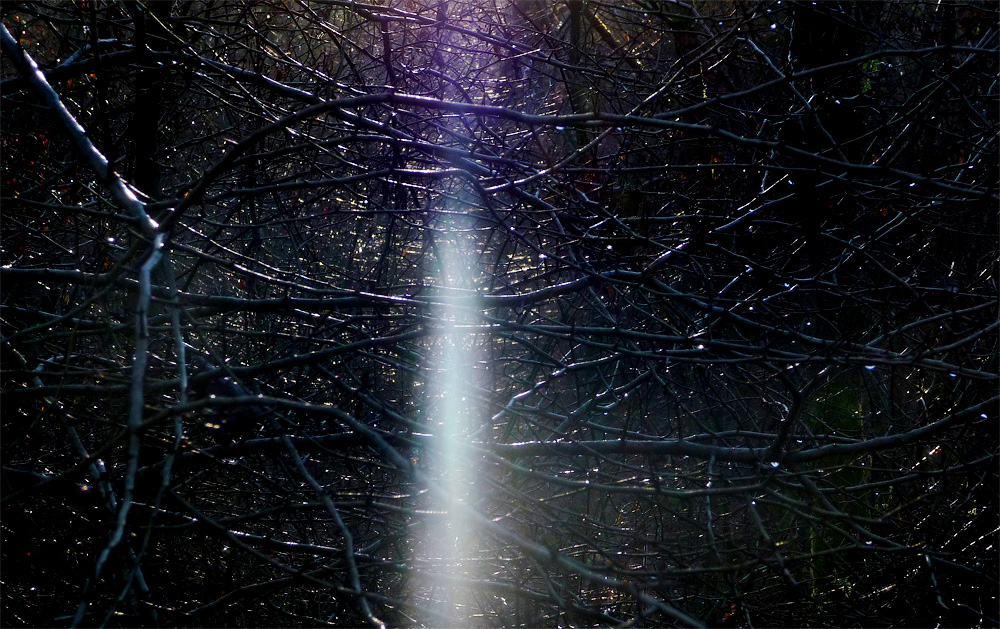 Pausing only to try and photograph this wierdness – more as proof that I wasn’t imagining things, than anything else – I scurried on down the path. I don’t mind spiders, as a general rule, but you never know.

I’m happy to report that I made it back to the car-park un-molested by many legged beasties. Scraping mud from my shoes, and reflecting that both of the wonderful things I’d seen were much more fitting marks of the season (and thus worthy of celebration) than anything red, shiny or tinsel bedecked,  I noticed the two other occupants of the car park. Both men, as it happens. One bloke was sitting in the open back of his expensive estate car changing from a very muddy, heavily worn, pair of trainers to another. Sweat-shirted and lycra-legged, he’d obviously just returned from a run through the woods. He looked pre-occupied, tired and seemed to be well on the way to the next thing on the list in his head.

The other man was leaning on the side of an offensively huge, shiny and un-muddy S.U.V. regarding a lanky dog wee-ing on a nearby tree stump.  On his face a striking expression, a mixture of disdain and sorrow. I can’t remember the last time I saw someone who so clearly did not want to be where he was.

Both of them, it seemed to me, not really present at all. They may as well have worn buckets over their heads, for all they were seeing.

But surely their eyes will have gathered mor or less the same impressions mine did….so maybe a little something got into their souls after all, unnoticed.

It would be good to think so, wouldn’t it?